In the previous post I talked about what is Dunbar’s number and the constraints it places on social networking. This post will be about why Dunbar’s number matters and has to be taken into account by internet marketing people and SEO/SEM.

Why does it matter?
To those of you scratching your head trying to find the reason for the huge interest in this number (a purely academic interest initially), I will point out that after Dunbar published and talked about this number our society witnessed the social media boom.

Social media, such as Facebook or Twitter, seem to be limited by the same factors. For instance, a much cited piece of research on this topic is Gonçalves, Perra and Vespignani paper that analyzed 4 years worth of tweets between 3.006.180 users and tried to model an algorithm to identify the most cohesive group. 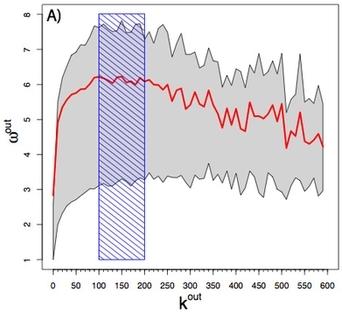 The graph represents out-weight as a function of the out-degree. The average weight of each outward connection gradually increases until it reaches a maximum near 150-200 contacts, signaling that a maximum level of social activity has been reached. Above this point, an increase in the number of contacts can no longer be sustained with the same amount of dedication to each. The red line corresponds to the average out-weight, while the gray shaded area illustrates the 50% confidence interval.

If you are not interested in the technical details I recommend you to pay a visit to Rick Lax’s highly entertaining account on Wired about how he failed to disprove Dunbar’s number limitation in his own facebook social network.

Here is what you will find should you wish to take some time and examine google results related to what people talk about when discussing Dunbar’s number:

Nonetheless, according to Bloomberg Businessweek people in the social media increasingly start taking into account the limitations imposed by Dunbar’s number. One interesting example cited by Bloomberg is Path. Path engineers initially decided to limit intentionally the size of the social network to 150 in a bid to emphasize quality social networking, explicitly building on the ideas of Robin Dunbar. Their example became less clear cut in June 2014, when Path Blog announced they lifted the limit to 500 and provided their reasons for this change. 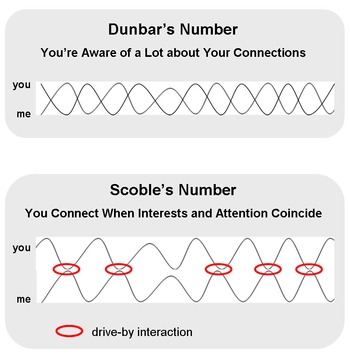 For a topic that is quite popular in blogs and forums related to social media and SEO, there are (surprisingly) little in terms of implications that Dunbar’s number has or can have on SEO/SEM. I’ve spent hours researching this topic with relatively little to show for it in terms of clear stated implications about how does Dunbar’s number affect SEO. I have selected three representative (for me) points of view and ordered them from the oldest to the most recent.

“Our future is Scoble number, forget Dunbar’s number” is the reverse prediction coming from Hutch Carpenter blog as early as 2009. I took the image on the left from his blogpost because it does illustrate very well the difference between strong vs. weak ties and how they behave in social networks.

The problem with interactions guided by temporary interest coincidence is how long can you afford to spend time on it? People increasingly realize their time and attention budget is limited, so Scoble-like interactions had drive the the internet to the current under 15 second marketing trend. Coupled with the increasing switch toward the mobile segment, this appears to be more than a temporary trend. However, it doesn’t mean at all that we can forget Dunbar’s number.

Simon Mustoe seems to be taking both into account. In an older blog post from 2010 about brand strategy in the light of limits imposed by Dunbar’s number, he identifies two possible strategies:

1. One is geared toward identification of interested fans and continuous efforts to retain such links via deeper and more meaningful relationships

2. While the other is expansion of weak ties to reach temporarily a larger slice of the network. Thus, one will maximize Scoble-like interactions while the other will try to get inside the Dunbar’s number of consumers.

Finally, Marcus Taylor in a very recent blog post on the future of wearables (google glass especially) seems to confirm both predictions by saying “I have a feeling that Google Glass will encourage more one-on-one sharing with the friends who are closest with us... While ‘share with all’ will likely always be an option, I feel if widely adopted, Google Glass could be a great platform to center itself around relationship depth rather than breadth”. As I read it, he seems to be saying that in terms of SEO/SEM, we can expect a move toward hyper-local marketing couple with ultra-focused social marketing.

What do you think? Scoble-like future for internet marketing and SEO? Or Dunbar-like future?