JanusVR - the next generation browser?

Virtual or Augmented Reality (VR / AR) are hot topics these days; magnets for all kinds of online content. Usually interest in VR is coupled with a focus on enabling hardware and tech. Sometimes the interest switches to innovative ways one may use VR; Nonny de la Pena riveting TED talk "The future of news? Virtual reality" was able to generate a significant spike. JanusVR is, interestingly, more about enabling software - a browser that gives the user a virtual reality environment to explore the internet. That’s something, isn’t it?

If you want to form a first impression, see the video below that showcases the key features of JanusVR. If you are more daring, go here, download it and have a go at playing with it. It would, of course, work better with a VR headset, but you can get a pretty good idea even from your laptop. And, yes, some of the graphics will seem a bit on the crude side. Ignore that for the moment and focus on functionalities, on what it can do. Jaw-dropping graphics will arrive in due time assuming the idea gets off the ground.

Video description: The key features of the JanusVR browser - "the first browser that gives users a virtual reality (VR) environment where they can interact with both 2D and 3D content seamlessly", according to venture capitalist and investor Eric Hippeau.

Is JanusVR the future? I am sorely tempted to say so, but then I grew up with cyberpunk; now, I have to restrain myself from letting my imagination dictate terms to "reality". That said, however, there are already signs the future is already here (even if its distribution is highly skewed).

Take into account that people talk more about it. Below you can see Google trends results for "virtual reality" in the last 5 years. There are peaks and valleys, but the interest is rising. 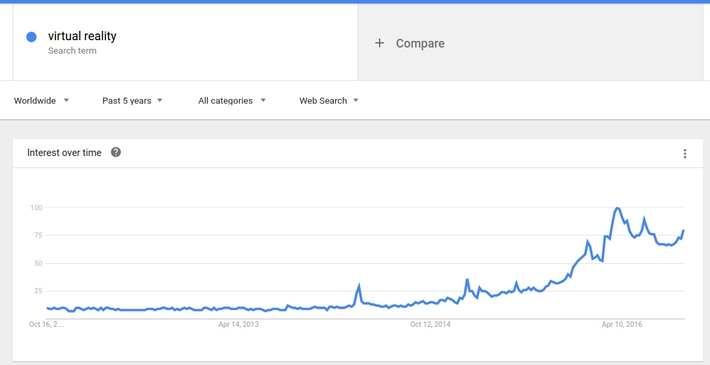 It isn’t just talk, either. There is active work being done in areas other than hardware that aims to make VR / AR your next year's’ reality. Or, the year after. Take a look at the WebVR project - an experimental JavaScript API with the objective to provide access to Virtual Reality devices in a browser. Even better, take a look at MozVR.

Yes, when you look at JanusVR or the samples from WebVR or MozVR you will be unimpressed with the graphics, but you have to take into account that the industry as a whole will have to switch to a different understanding of uI/ux. Right now we still very much in the “window” metaphor mentality. As you already saw in JanusVR, this is not particularly well suited for the VR more. Below you can see a tweet by Jerome Derozard where Michael Abrash, Chief Scientist at Oculus, is explaining where he thinks we will be in 5 years time in terms of VR specs. Just switching to a greater depth of focus (2 meters is the proposed goal) will necessarily require us to ditch the window metaphor.

VR / AR is fairly certain to happen. Will it affect web development, SEO, marketing? Absolutely. Things already a getting more and more interactive and increasingly more visual. JanusVR is strongly reminding me of the days of Netscape surfing: clunky by today’s standards, but absolutely engrossing and exhilarating then.