Method to this madness: what people share on social networks and why?

How do you make people hear you out about something everyone knows is boring and would rather avoid? One answer is to create content that goes viral and repeatedly shared.

A great example - The Dumb Ways to Die campaign

Dumb Ways to Die video (see above) was the answer proposed by the McCann Melbourne ad agency to Metro Trains operator from Melbourne, Australia. In a bold movement, Metro Trains gave the green light and so, at the end of 2012, the campaign video was made public and promptly went viral through sharing and social media.

"For practitioners the potential benefits of viral video campaigns may seem abundant; however success can be 'hit and miss'. While some videos may be shared tens of thousands of times in a few short hours, others fall very short of expectations. So why do certain pieces of content get shared more than others?" - asked Dr. Karen Nelson-Field in a report published by The Ehrenberg-Bass Institute back in 2011. To answer this question, her team pored over videos and carefully assembled a large data set of user-generated content combined with 355 billion branded videos from social video marketing analytics platform, Unruly. 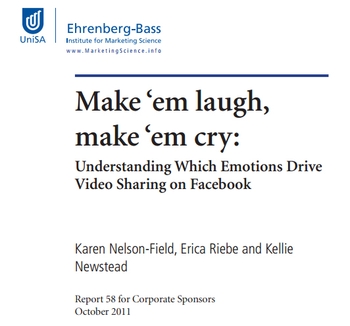 Here is Table 3 from the 20011 report that sums up their results:

Conclusions: if you can, ride the exhilaration emotion

What is important to remember from all this for companies or marketing specialists? Here is a brief list:

In the end, the 'method to this madness' alluded in our title boils down to this: you can either spend a lot of effort generating content with a high degree of emotional Arousal (very difficult and rather time- and resource-consuming!) or generate easier, low-arousal and more varied content in larger amounts.