Musings on research in gaming, flow theory and how to make a better app 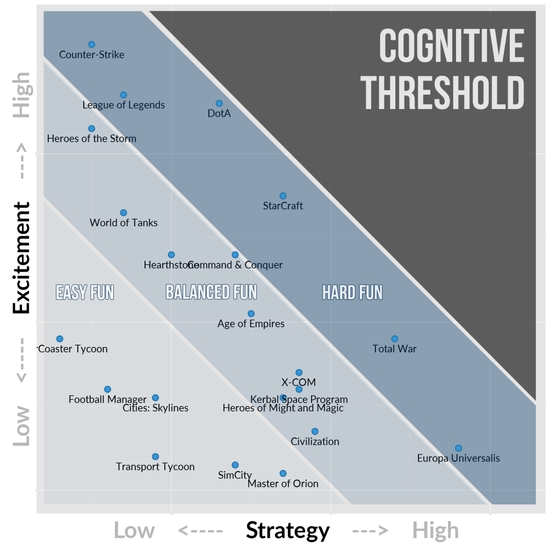 It helps sometimes to look at what you are doing from a different perspective. Although we enjoyed Nick Yee’s post "Game Genre Map: The Cognitive Threshold in Strategy Games" in January, it had to simmer on the backburner for a while till we figured out not only why we liked it, but also some tentative ideas on how is it relevant for apps. Because it obviously is.

What the Cognitive Threshold is
Using data (a 5-minute survey about personalized gaming motivation) from over 140,000 gamers worldwide, the guys from QuanticFoundry had created a relatively large database that allows them to answer some interesting questions and get non-trivial answers. In the post we are talking about here, they started by plotting games along two dimensions: Strategy and Excitement. Games that score high on Strategy appeal to thinking, planning ahead, and making decisions; conversely, games high on the Excitement dimension appeal to fast-paced action and gameplay that rewards rapid reactions.

If you have no experience with the game titles the graphic presented above isn’t going to make a lot of sense to you. However, if you have even a basic familiarity with these titles, you will notice immediately that the graph does make sense intuitively. For a moderately proficient gamer like me it makes a lot of sense even at first glance. Top-selling games such as CounterStrike, StarCraft, Civilization and Europa Universalis are more or less where I would judge them to be based on my own experience with them.

The other thing you will notice is that excitement and strategy seem to be inversely correlated: it is difficult to have a blend of both. Interestingly, it also (sort of) points out why StarCraft turned to be one of the most popular games ever: it is a very good combination of excitement and strategy depth and manages to satisfy both in your average gamer. Also, why Europa is such a niche game.

Plugging in apps into this picture
Apps, of course, are not games. But it struck me that the whole idea behind Nick Yee’s post is an application of an older theory by a hungarian psychologist with an unpronounceable name but a very easy to follow book. I am talking of Michael Csikszentmihalyi "Flow: The Psychology of Optimal Experience" (1990). 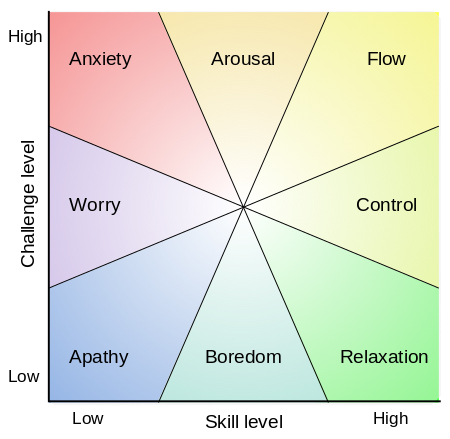 In a book that turned out to be a bestseller (and is still in several tops), the author defines the idea of flow: "the state in which people are so involved in an activity that nothing else seems to matter; the experience itself is so enjoyable that people do it even at great cost, for the sheer state of doing it."

On a more general level, almost every human activity can be conceptualized in this terms. Including games. Including apps. This got us musing on how this can impact app building. For instance, why not replicate the QuanticFoundry methodology and generate a dataset that will allow us to start classifying apps according to the motivation potential they manage to produce in users? We can then analyze what sort of audience is best suited for our apps, what are they looking for in an app? How can we create a "Starcraft" equivalent app; one that manages to get users into flow regarding whatever the app is for?

What do you think? Is this relevant for apps as well as for games? Do you know of any apps that manage to get into the "flow" and keep you there? Why do you think they manage to do so?
Let us know what you are thinking!