Why Google is … God or Evil: query answering struggles

One of the discernible trends for all search engines that will continue to drive innovation and work is query answering. It used to be you had to think - sometimes quite hard - which keywords to use when searching for something. Let’s say I needed a specific recipe or a local hotel’s checkout hours or a troubleshooting a specific video card on a given computer system. Increasingly, search engines opted toward a more conversational query answering, making it much easier to search for information using naturally worded questions: How do I…, When does…, How to... , Who…, etc. Solved? Far from it!

It is the fault of all those Sci Fi movies and books with cool robots or AI systems talking to people that caught on young and impressionable kids. Remember HAL9000? Even though definitely an OLD AI concept, isn’t it curious that we are still very far from being able to converse with a computer system at this level? This doesn’t keep in check the imagination of writers of filmmakers: HAL9000 complexity pales when put alongside the Oracle and the Architect from the Matrix series.

Well, it turned out it is far more complicated to build such an AI in real life, but we are not without hope. For instance, Ok Google is a small step towards building such an interactive AI. OK Google is the voice command interface used to activate Google Now voice search on your Android smartphone, as well as other Google devices such as the (apparently dying) Google Glass smartglasses.

Even with its current limitations it is arguably quite useful, even if there is a lot of room for improvement, as recently pointed out on ZDnet. Give it a try if you haven’t, it’s cool.

This drive toward a more conversational query answering is certainly not without problems. Periodically, search engines (Google of course, but also Bing and Yahoo) are being criticised for the suggestions that pop up as part of their search queries as is exemplified at the top of this blog post (note that Google already addressed this issue and will not display the same suggestions; also, I was not able to pinpoint when was the screenshot taken). Now that one is fun, but what about this one caught by BBC? 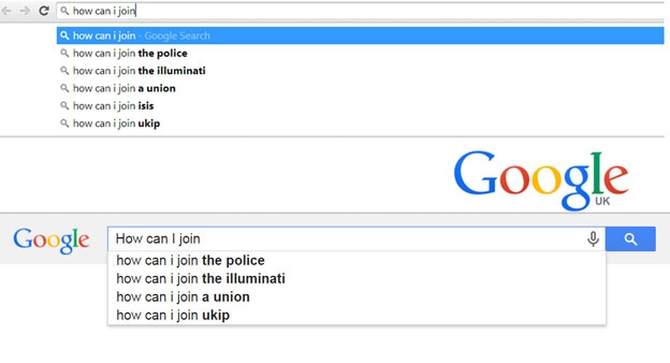 As you can see, Google UK was “suggesting” How to join Isis - the infamous jihadist organisation - among the top five options for the search query How to join. Shortly after being alerted by the BBC, Google filtered out this option, at least in UK. The reason for this suggestion being there (unless of course you like conspiracy theories) in the first place has to do with the nature of the algorithm - essentially it picks up the most popular searches.

Freedom of search or responsible algorithms?

But this raises a number of fundamental issues related to freedom of speech. Should search engines be neutral and provide access to information or should Google filter out suggestions such as these? Google and Bing were criticized for both filtering or failing to filter adult content suggestions, violence, criminal activities or child pornography. So far, search engines opted to go down the censoring road. I highly recommend an older (but not less relevant) post by Nicholas Diakopoulos on Future Tense blog where he analyses what and why gets filtered and some of the more bizarre results such filtering committees are producing.

This controversy is not going to abate. If anything, access to information would bring the topic of search filtering increasingly to our attention.

What do you think? Freedom above everything else? Or social and moral responsibility that trumps all?